We have laid yet another

Which one will save us?

Which one will rise

We must call out our own names

Carry on the flame

Hope can defy the grave

Who will roll away the stones?

A Legacy of Defying Hate #Sharpswar

Our Unitarian Universalist tradition draws from many sources.  The six primary ones are listed in the front of the grey hymnal, the page before hymn #1, if you want to glance at them.  We tend to know our principles better than our sources, but the sources are what really ground our faith and uniquely distinguish it from other secular and religious institutions.

Ellen just spoke of one of those sources, the fourth, which is “the Jewish and Christian teachings that call us to respond to God’s love by loving our neighbors as ourselves.” Ellen learned much about love and about justice from her Jewish education. Martha and Waitsill Sharp were inspired to act from that same source. In 1939, most Unitarians identified as Christians, as followers of the prophet Jesus.  Not exclusively so, of course; we almost always have had a liberty clause which guaranteed freedom of thought and belief for both congregations and ministers.

I will talk more about the history of our free faith in a couple of weeks, but today I want to focus on the story of the Sharps.

Their story, for us, relates directly to our second source which is:

Words and deeds of prophetic women and men which challenge us to confront powers and structures of evil with justice, compassion, and the transforming power of love.

Martha and Waitsill Sharp confronting evil directly as they worked to rescue people.  They left their young children and risked their lives for people they did not know in another part of the world.  Why did they do it?  Why would anyone leave their children?

They were already leading lives of meaning.  They were already making a positive difference in the world.  Martha was a social worker. Waitsill was a minister.  They both were aware of the terrible threat of the Nazis.  Waitsill preached about it, more than once I am sure.

They knew what they believed. They knew that all human life had value and that everyone deserved justice and compassion.  As Unitarians, they also knew that humans had a responsibility to act. They could not stand by and expect God to save anyone.

But I don’t think they would have gone at all except for one very important reason.

They were asked.  They weren’t the first people asked.  17 ministers had already said no, but for the Sharps when someone asks you to do something important, you had to at least think seriously about doing it. They said yes. They traveled to Prague.

So much of our Unitarian Universalist history comes from that time and place.  While in Prague, they met Rev. Norbert Chapek, the creator of our flower communion. They were working with the newly formed service committee, the committee that commissioned Hans Deutsch to create our symbol of the flaming chalice.

The chalice was used for the rescue work that the Sharps and others did. Every time we light our chalice we are honoring that legacy of confronting evil with justice, compassion and the transforming power love.

Like any legacy, we can either ignore it or try to live up to it.  I think most of us try, the best we can, to do what our faith calls us to do in the world.  This congregation’s mission statement, “Live your sacred • Transform through love • Act with courage” is certainly in keeping with that legacy.

The powers and structures of evil are rising today, in our very own country.  How will we answer the call to confront them with justice, compassion, and the transforming power of love?

We have virtually the same story that most countries had during WWII.  Jews were denied entry with the excuse that some of them might be Nazi spies.  Today the excuse is that they might be terrorists or criminals.  But people are not skittles, but it can make for some interesting metaphors.

I found the following on facebook written by Eli Bosnick.

I am going to try and skip over some of the profanity. 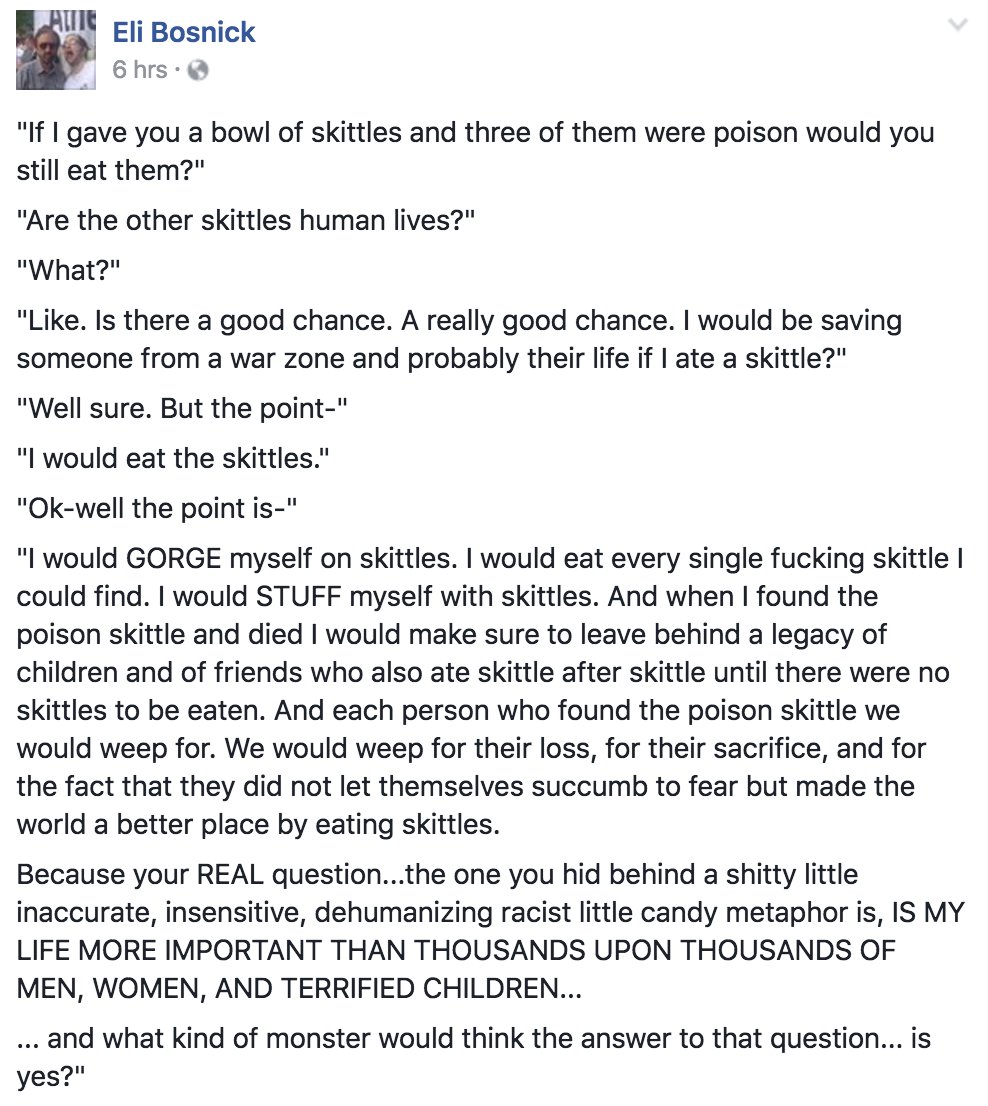 The Sharps loved their lives, but they knew that other lives were just as important.  They were willing to eat the skittles.

Would you eat the skittles?

Today, in America, the forces of hate, misogyny, and white supremacy have been unleashed.  They have always been here, but they are more blatant because of the rhetoric of the Presidential campaign.  I can’t tell you how to vote, but I can say to vote your conscience and your values.   There is so much at risk in this election for so many vulnerable people.

People of color are being executed almost daily in our streets.  Just a few days ago, Terrence Crutcher’s car broke down.  The police arrived and this unarmed man put his hands up as they directed.  He had not committed a crime.  But he was shot down and killed simply because he was a large black man and so looked like a “bad dude.”

Meanwhile while white college boys spend a couple of months in county jail after they are convicted for brutal rapes.

Ending racism will require much more than putting a slogan on a wall, or even preaching a sermon about it.

The Sharps risked all.  Their actions saved lives, but their own children were hurt by their absences.  Their marriage fell apart.

What are you willing to risk to save lives?  Black lives because we believe black lives matter?   Immigrant lives, Muslim lives, because those lives matter too.  I’d use the phrase “all lives matter here” if that line had not been corrupted by those who believe that only the lives of people who are exactly like them really matter.

The Sharps did not care about the religion or the race of the people they saved.  And back then, Jewish people were considered to be a different race.  We know now that race is simply a social construct, that there is no intrinsic difference between any of us, no matter the color of our skin.  . But even in that time of ignorance, the Sharps knew, because of their Unitarian faith, that all life is sacred, to be treasured and protected.

Others had said no, but the Sharps said yes when given the opportunity to make a difference, to do something important with their lives.

The poet Mary Oliver asks us what we will do with our “one wild and precious life.”

It is the same question Martha Sharp asked her grandson, “What are you going to do with your life that is important?”

Will you say yes if someone asks you to do something scary for justice?  It doesn’t have to be life threatening, although these days you can never tell.  Maybe it is just speaking up when you hear hate expressed in a public place – like when you hear someone in the grocery store rudely telling someone else to speak English instead of Spanish.   Anyone ever heard that?  I have, even here in California where Spanish was spoken long before English was.  Maybe it trying to talk to some of your relatives who have been swayed by the politics of fear.

Explain why you care, why you are willing to take a risk for justice and compassion.

Explain that your faith calls you to have a warm heart and an open mind.  Tell the story of the Sharps.  Explain how that story has inspired you.  They were asked and they said yes. Consider yourselves asked.  May it be so.

Letter to the Editor of the Marin Independent Journal

Time to Move Away From Our Racist Past

Thank you for your editorial saying that the Dixie school district should change its name. I agree that it is long past time to do so. It is important to acknowledge our real histories, even if they are embarrassing. Only then can we move forward toward healing and reconciliation. The name “Dixie” was not an accident, and it was chosen for a specific and racist purpose. Also, while I don’t know the actual details of the history of racial segregation in the Terra Linda and Marinwood neighborhoods that comprise the Dixie School District, those are exactly the kind of suburbs that routinely had written covenants that prevented anyone who was not “Caucasian” from purchasing a home there. I do know that the Sleepy Hollow subdivision near San Anselmo had such covenants in its deeds well into the late 1970’s. Sundown Towns: A Hidden Dimension of American Racism by James W. Loewen documents how widespread this practice was in the north and west after WWII. Racial segregation in housing was not an accident, but was instead quite deliberately planned. How can African American children feel truly welcome in a school district named with a racist intent? If we want to welcome all, then it is time to say we are sorry for our past and to change the name. To do so would be a symbolic and significant gesture toward racial reconciliation. It is time. Black lives do matter.

Cry Me a River

It has been a day for tears

For most of my life

And I am reminded

That hope can surprise us

That from hard work and pain

And love sometimes can win

So I cry for joy.

And I sob for all who have been lost

For the struggle has been long

And I cry for those who will still die

For the journey is not done.

There is always a backlash

As we know all too well

Even as a song of grace

Flows up from the grief

For those lost in Charleston

Cry me a river

Hold us and heal us

As joy and pain overflow.

Help us to rise

And stand once again

On the side of love.